Our task today is to herald the news in all directions; he who has a noble soul surely comes!”

Mr Charles Francis was born into a Catholic family in Melbourne, Australia in 1862.  And later embraced Islam in 1896.[1] For many years he was a member of British Indian Empire League. He travelled to India in 1903 as a representative or Commissioner of the British and Indian Empire League of Australia to present a petition to the Indian National Congress at its National Congress in Madras.[2] In October 1903 Mr Charles Francis met two Ahmadis Mian Mirajudeen Umar Sahib and Hakeem Noor Muhammad Ahmadi Sahib who encouraged him to visit Qadian.[3]

Mr Charles recalling his visit to India and Qadian writes in the fourth issue of Moslem Sunrise 1922:

“When I visited India in 1903 as the accredited Representative or Commissioner of the British and Indian Empire League of Australia, to present a petition to the Indian National Congress at its annual conference at Madras held in December of that year, my mission was also for the purpose of completing my Muhammadan Education by means of a tour through Islamic countries en route to Madras. As well as to explain the cruel operations of “The White Australia policy” and the restrictions of the Alien Immigration Act that had been created a Constitutional Law by the Common Wealth Governments of that Country.

To tell you of the result of that historical journey on my part to India would be impossible in these columns for the incidents of that wonderful Mission, if published would fill a great volume. And amongst which much could also be related in regards to my personal visit and sojourn, whilst in the North West Provinces at Qadian in the Punjab – and how I met the Ahmadees and conferred with the Promised Messiah Ahmad (the peace and blessings of God be upon Him for all he suffered for Islam’s sake; as every Christ must also suffer who lays down his life for his Friends)…What my feelings were towards the Good Man beforehand when I was warned against him during my journey through the Far East (either to Doubters or Suspicioners) were removed entirely at Qadian. Spirit perception of the clear fulfilment of the prophecies of the Promised ONE gave me certain proof of their divine origin. This meeting with GHULAM AHMAD in Qadian in the year 1903 was a wonderful proof of the truths of Islam, that words which had been uttered thirteen hundred years ago were then being fulfilled. But space and other subject matters do not permit me to here refer to them more extensively. My visit was locally or only decided upon whilst I was lecturing at Town Hall Lahore on the question ‘Are the Indian Peoples British subjects?’ On 22nd October, 1903 I was at Qadian and received the hospitality of the entire community…

Nothing astonished me more among all the extraordinary incidents during my Missionary travels than the finding of myself in that sacred place and face to face with its Messiah. Eventually when I was presented to him and eyes looked into eyes. He knew me to be Abdul Haq (The Slave of Truth) and I knew him to be Divinely appointed one to call the true believers (The Faithful) together again to make the world safer of Islam. The Muslem confidences that followed betokened the Love of God between us. Soul spoke to soul through spirit, after Allah has joined then them by the means of the miraculous meeting…Finally after long months of deliberation and separation no wonder then that I made the declaration in the Review of Religions in April 1906 that ‘I have become a member of the Ahmadiyya society of Qadian”[4]

Mohammad Abdul Haq (Charles F. Sievwright) stayed for two days in Qadian, the accounts of discourses are published in Malfuzat Vol 5 23 Oct 1903 (Edition 2016). The Promised Messiahas was informed that Charles F. Sievwright had been a Muslim for seven years and had moved from Australia to London. During a meeting with the Italian ambassador, Muhammad Abdul Haq had mentioned that he was interested in learning about Islam.  The ambassador suggested that he should go to Cairo. Lord Stanley[5] advised that his purpose would be fulfilled in Bombay India. After touring India, it was in Lahore that he heard about the Promised Messiahas and so he decided to go to Qadian to meet him. He arrived at Qadian with Mian Mirajudeen Umar Sahib and Hakeem Noor Muhammad Ahmadi Sahib and joined in the congregational Maghreb prayer. Later he met the Promised Messiahas.

Muhammad Abdul Haq Sahibra stated wherever he had stayed he met Muslims and discussed matters directly with those who knew English or this purpose was achieved through the means of interpretation. He said he had benefitted much from people’s ideas. The relationship to the external Muslim World through spiritual means does not require knowledge of language and one can benefit much from this spiritual bond.

The Promised Messiahas explained that according to Islam, matters of spirituality are dependent upon prayers and concentration but to benefit from it, time is required. Until a strong bond and loving relationship is formed, this cannot be experienced. Thus, prayer and concentration are the way to guidance and a mere verbal discourse is not of much benefit.

Mohammad Abdul Haqra responded that: I feel thirst for this kind of spiritual bond. When I entered Qadian I felt my heart was at ease, and whosoever I met here so far, it feels as if I have known him for a long time.

The Promised Messiahas explained that it is the natural law of God that every soul requires a heart and when that heart is formed then the soul is breathed into it instantaneously.  It is an important matter for you [Abdul Haq] that the realities which God has opened to me should be disclosed to you gradually. There are many mistakes in the long-held beliefs of Muslims and these mistakes are due to their interactions with the Christians. But God now desires that the blessed and illuminated face of Islam be shown to the world. Spiritual progress requires purity and clarity of beliefs.

The Promised Messiahas also explained that a great sacrifice is needed from a community who accept a reformer, to be steadfast in their faith because it is inevitable that they will face opposition and persecution and many leave when hardships come their way. The Promised Messiahas mentioned Alexander Russel Webb, who was at first inclined towards us and then took a step back which he now regrets. The Promised Messiahas further explained that among our principles are living a simple life and avoiding complexities, to which Mohammad Abdul Haq responded that since he entered Islam and having partaken from its spirituality he is in love with the simple life and therefore he would not be troubled if he lives in Qadian. During his travels he says he has experienced that a man who lives a simple life of solitude lives a peaceful life.

The Promised Messiahas mentioned that he also desires the same and added that a simple translation is not enough, a commentary is also required with it. The Promised Messiahas further elaborated on the differences between his community and other Muslims and pointed out the errors in their beliefs with regards to the ascension of Jesusas. He added that due to the rational approach of the Quranic teaching it is beyond any criticism. The Muslims on the contrary have deserted the Holy Quran and have assigned such things to it that are a form of allegation on every step, for instance many lies have been added to the incident of crucifixion which are contrary to the teachings of the Holy Quran. The Promised Messiahas mentioned that he always prayed and wished that someone among the Europeans would devote a part of his life for this cause. But this would require that he spends time in our company in order to completely understand the principles that would eradicate all forms of accusation against Islam. Only then can he serve this purpose [correcting false accusations against Islam] in other parts of the world. This service requires righteous and resilient soul. Charles F. Sievwright mentioned that he will be leaving the next day because of his assignment which related to the ban on Indian merchants travelling to Australia. The Promised Messiahas said that the commentary of the Holy Quran will be done at its appropriate time but if Allah puts in your heart and you come to stay at Qadian for some time, then a list of such accusations could be drafted, which have been raised as allegations by the non-Muslims due to their misunderstanding or have been misinterpreted by the Muslims. So, this commentary will serve as a rebuttal to the allegations raised in the West.[6]

The government records of America show that Charles F. Sievwright had first moved to Fresno California in 1906 and then in 1914 to Los Angeles. He had two daughters, Carroll born in 1908 and Iris born in 1913.[7] An interview of Charles F. Sievwright in the month of Ramadhan was published in the Los Angeles Examiner. Charles F. Sievwright was active in Tabligh of Islam and Ahmadiyyat. He writes: “Ever since I said “Good Bye” to my Master at Qadian now over 19 years ago. Thus, did I again manifest the principle “I must operate before God can operate” After the advent in America of Mufti Muhammad Sadiq I have further fulfilled my pledge to associate with the Ahmadiyya Movement in Islam. And have been active in assisting its first Missioner.”[8]

An article appears in the April Issue of the Review of Religions 1906 entitled ‘Ten Years in Islam’ where Charles F. Sievwright announces his acceptance of Ahmadiyyat. Mohammad Abdul Haqra (Charles F. Sievwright) passed away in 1933 in Los Angeles and is buried in Forest Lawn-Glendne cemetery.[9]

[5] Britain’s First Muslim Peer of the Realm, he converted to Islam, in 1869 Lord Stanley became the first Muslim member of the House of Lords. His death was also announced in the Review of Religions Feb 1904. 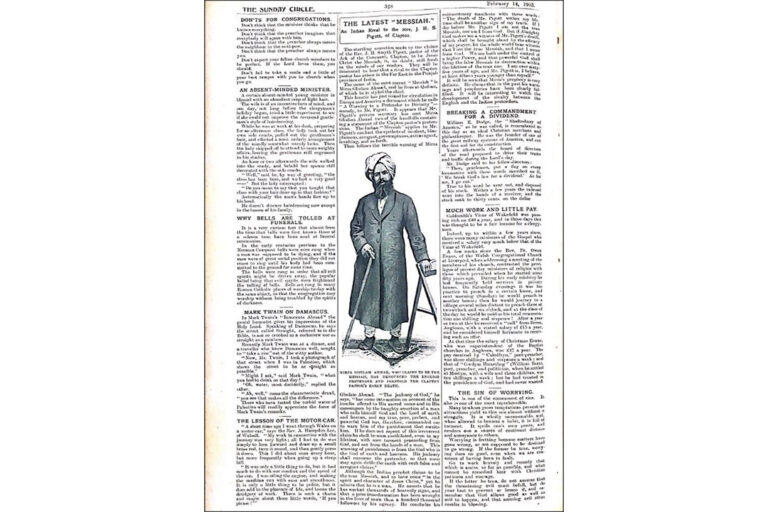 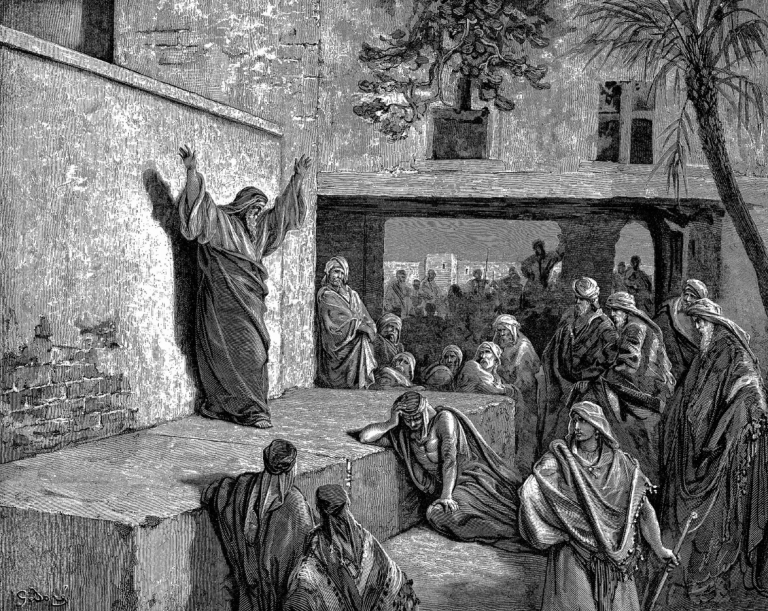