“Mufti Muhammad Sadiq has a burning desire for the propagation of the Ahmadiyya Movement, and there is hardly any place in England where he has not corresponded with the English researchers or editors of the newspapers that he has come to know about and not communicated to them the claims of the Promised Messiahas……Mufti Sahib does not need any introduction. The entire Ahmadi world knows his renowned name and is aware of his devotion, sincerity, and loyalty.”
(The Promised Messiahas May 1908)

Hazrat Mufti Muhammad Sadiq Sahibra was born on 11 January 1872 in the town of Behra, India.

Hazrat Mufti Sahib was introduced to Ahmadiyyat when he was in his teenage years. Likewise, in 1890, at the age of 18, he went to Qadian to meet the Promised Messiahas. After completing his matriculation (Entrance Examination) in his hometown, he was appointed as an English teacher at Jammu High School in 1890 with some assistance from Maulana Hakim Nooruddin Sahibra. He visited Qadian for the first time at the end of the same year and was initiated at the sacred hand of the Promised Messiahas on January 31, 1891.

Love for the Promised Messiahas in youth

Sadiq Sahib stayed in Jammu for 5 years. He then started teaching Mathematics in Lahore in the year 1895, before joining the Office of Accountant General as a clerk, where he worked till 1901. During his stay, Sadiq Sahib used to visit Qadian almost every Sunday to see the Promised Messiahas. Mufti Sadiq Sahib migrated to Qadian in July 1901 to settle permanently near his Spiritual Master, the Promised Messiah. He served as the Second master in the beginning but became Head­master of Taleem-ul-Islam High School in 1903. He was appointed Manager, Superintendent and Professor of Logic when the college was opened on May 24, 1903.

On 23rd May 1908, a few days before his demise the Promised Messiahas delivered a speech after Zuhur prayers, while praising the efforts of Hazrat Mufti Muhammad Sadiq Sahib’sra he said:

“Mufti Muhammad Sadiq has a burning desire for the propagation of the Ahmadiyya Movement, and there is hardly any place in England where he has not corresponded with the English researchers or editors of the newspapers that he has come to know about and not communicated to them the claims of the Promised Messiahas, The sorrowful ending of Dowie of America and the pathetic failure of Piggot of London are the result of the efforts of the respected Mufti [Sadiq] Sahib. While he was the cause of the destruction of Piggot and Dowie, he was also the cause of guidance for many fortunate souls. It was the result of his true and sincere efforts that some gentlemen and ladies of Europe and America accepted the truth of the Promised Messiah as and repented of their false beliefs. In short, Mufti Sahib does not need any introduction. The entire Ahmadi world knows his renowned name and is aware of his devotion, sincerity, and loyalty.

Services During the Blessed Life of the Promised Messiah

Hazrat Mufti Sadiq Sahibra was fortunate to serve Is­lam in several ways during the times of the Prom­ised Messiah:

Hazrat Mufti Sadiq Sahibra left for England on March 10, 1917, as a missionary. He remained involved in the propagation of Islam during his stay. He reached London on April 17, 1917, and joined Qazi Muhammad Abdullah Sahib who was already active in spreading the message of Islam. Mufti Sadiq Sahib spent about two and a half years in England and published many tracts during his stay. He preached the message of Islam to important personalities including King George V and the Queen of England, Secretary of State, Lord Montego, the British Prime Minister, Lord Mayor of London, and Prince Yori Hito Hakashi Foshi of Japan.

After his stay in England, Mufti Sadiq Sahib was instructed to head to America in 1920. Having landed in Philadelphia, he was immediately detained on suspicion that he was there to preach polygamy, which was against the laws of the US. However, he was able to successfully explain that while Islam allows polygamy. Having spent two months in detention, Hazrat Mufti Sadiq Sahibra went to New York, to continue his practice of lectures and writing. He went from New York to Michigan, and from there to Chicago, where he established the very first Ahmadiyya Muslim Mosque in the US. By the Grace of Allah, Mufti Sahib was able to convert over 1000 people to Ahmadiyyat during the 3-and-a-half-year stay in the US.

In 1924, he returned to India after establishing a strong base in America for Ahmadiyyat. He then went on to serve the community in other capacities, including travelling to Ceylon for more preaching duties, until he passed away in 1957, having served on three continents and touched thousands on his way. 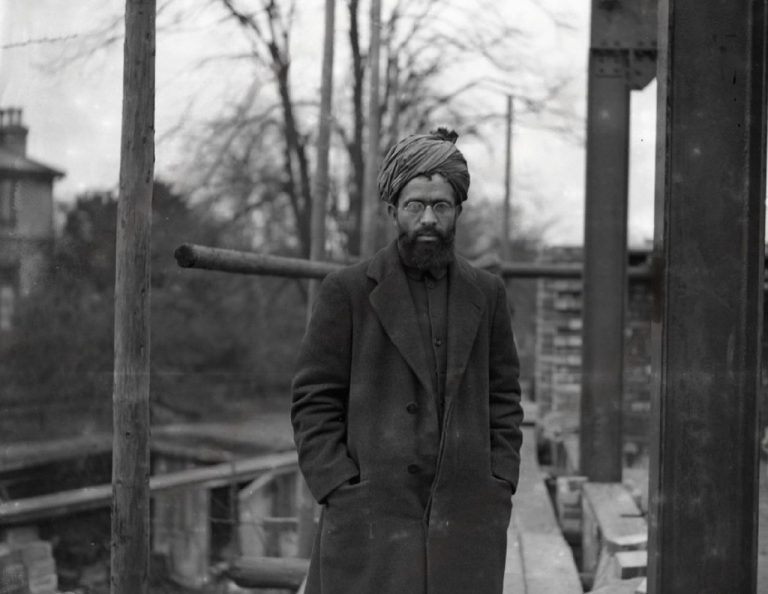